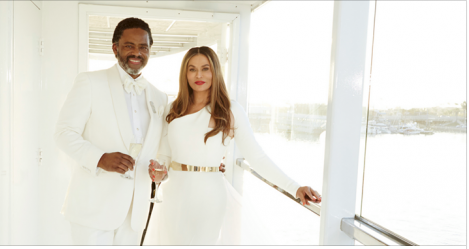 . 12), Beyonce and Solange’s (very fabulous) mother wed her actor fiance,  Richard Lawson aboard a yacht in California. Named “Eternity,” the boat housed 300 guests, who were captured wearing all white. Hov looked debonaire in a full white suit, while Mrs. Carter opted for a white lace number with a matching headband. But it was the new Mrs. Lawson, however, who looked “***Flawless” in an off-the-shoulder white Romona Keveza gown and gold belt alongside her new husband.

News of Knowles and Lawson’s engagement broke last October. During an inspiring speech for the Texas Women’s Empowerment Foundation, Knowles gushed over her new relationship after sharing the pain she experienced with her ex-husband, Mathew Knowles

a year and five months and I’m in a committed relationship with that handsome man. And I’m in my happiest I been in a long, long time,” she said.

Watch a clip from the Tina Knowles and Richard Lawson’s wedding reception in the video below: