WHEN A TEENAGE MOM BECOMES THE MOTHER OF A TEENAGER 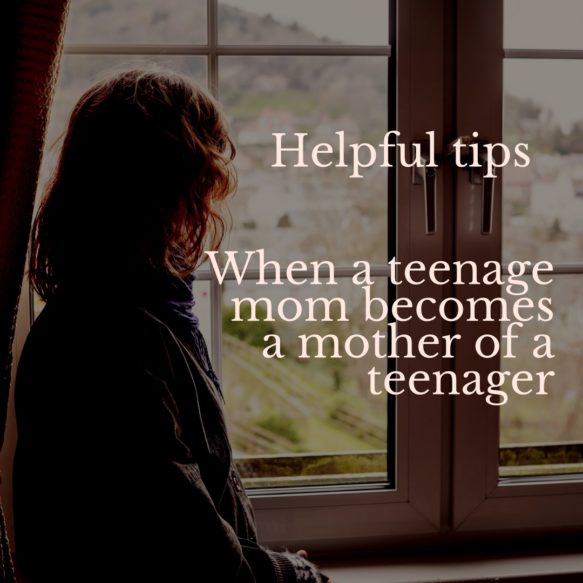 One of the hardest things in life that I have ever endured, was becoming a teenage mother…until I became the mother of a teenager. Where is the manual for this? So note to all readers, when your mom says that you will get everything back through your kids and more… she’s telling the truth.

As a teenager I thought I had the world figured out. I mean what teenager doesn’t know it all (I mean that in the most sarcastic way). I made good grades, I was pretty popular, I had a brand new car, good job (dietary aide at hospital after school), and a serious relationship (well, it was serious in my eyes). I was accepted into my first choice college and I was ready for the world. Until that day I found out I was expecting. Scariest day of my life! My mother was strict! No parties, 10pm curfew, no sleepovers… so yeah she was going to kill me. Somehow between killing me and the baby being born, she became my best friend and supported me 100%.

I was very lucky I had a great support system and I was able to proceed with my dreams (even though I continued with a few more years of bad decisions). But I was a mother now, a life belonged to me. God trusted me, a scared teenager with someone else’s life. I was determined to be the best mother ever! I knew I would still be young when my daughter became a teenager so I pictured us hanging out at the mall on shopping dates, taking trips, being best friend/mother and daughter (yeah that was an epic fail lol, but we will get to that later). As much as this little life needed me, I needed her. Although I came from a great two parent home, there were times that I was very depressed. This was something that was not visible to the eye because I looked like a happy teenager. I longed for love and I really felt like this child would fill that void (which she did). She was my little best friend.

Lets fast forward to age 17… The attitudes, mood swings… Not the teenage love I dreamed about. In fact five out of 7 days, I’m ready to say “Yo, lets just square up” lol (I’m kidding by the way). Speaking to other parents with teenagers, I understand now they are all crazy (and I mean that in the most politically correct way). Again, there is no manual is for this, however here are some tips I have learned over the last couple of years that may help those with the teenage years:

1. Just because you think you are the cool young mom, you will never be cool to a teenager. Let me rephrase that, you will never be cool to your teenager.
2.Set boundaries and stick to them. Don’t try so hard to be your teens friend that you forget to be their mom. That is a recipe for disaster.
3. Dont forget that you were once a teenager. Put yourself in their shoes, remembering all of the emotions, stress from school, fitting in etc. that you experienced.
4. Experience is the best teacher. The may have to take a couple of hits before realizing that momma knows best (remember your first hard lesson).
5. Communication is key. Respect their feelings and allow them time to express how they feel, and expect the same in return. Be honest with each other.
6. Remember who is boss and stand your ground.
7. BE A PARENT AND SET AN EXAMPLE. Don’t be in the streets allowing your teenager to raise themselves. I know you still may be young, but you have to also be an example. You can’t tell your kids they can’t party, when you partying every weekend.
8. Don’t live your life through them. Let them have their own life. Some of the mistakes you made may be the ones they avoid. Teach them but don’t compare them to you.

Hopefully these tips will help, and I encourage mothers of teens to add more tips that have helped them. Raising a teenager is definitely different from I expected, a lot different. We are basically almost both millennials, so I can relate to a lot. I mean I know all the cool lingo, and dances and rappers (well I did until all these Dolls and Young such and such start coming out), but I also know the world is cold and I want to protect my kids from it as much as possible. The struggle of going from teen mom to mom of teen continues… In all honesty it like raising the younger you.