Turning Tragedy into Triumph with Ju the Superhuman: “Yes, you don’t like what happened, but this is who you are now…” 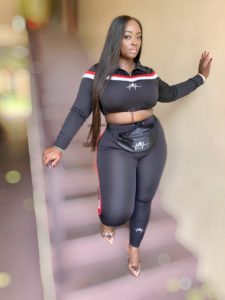 Pretty Hustlaz had the opportunity to interview Julie Saint-Fleur, also known as Ju the Superhuman. Her vibrant, beautiful spirit made it a very pleasant and humbling experience. So, get ready, set, and get prepared to be inspired!

Ju the Superhuman: “Thank you so much!”

Pretty Hustlaz: “So, I’ll just start , it’s no secret that you’re a burn survivor. Do you mind sharing what occurred on that night in 2016?”

Ju the Superhuman: “Yes, um I was a server at a night club, and one of those nights a couple of guys got into a fight. And one of them pulled out gun, and while everyone was running away from the gunshots.. one of the fryers was flipped over and the oil flew into the air and fell on a few of us, and it fell on my back. I guess becasue of the material I had on it clung onto my skin and it started cooking. So, um  I was rushed to the hospital and found out that I had third degree burns , and I had to stay in the hospital for a month. When I got out I had to do physical therapy and learn how to walk and sit again.”

Pretty Hustlaz: “Okay, okay… You’ve just reminded me of how strong you are. My next question is… what was one of your coping mechanisms during recovery? Because, you know how sometimes when we go through stuff, um whatever it may be, sometimes we have to find a way to keep pushing. So, what was it that you did to continue to push”? 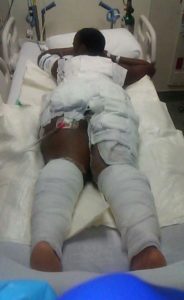 Pretty Hustlaz: “Absolutely, I agree with that. It definitely has to start with us, because if we’re never honest nothing will ever change, and we’ll be stuck in the same situations with same mind set. So, that’s a good point.”

“I’m like an IG “stalker”. So, I’ve noticed that (Ju giggles) you’ve said in the past you were conceited and sometimes you kind of refer to yourself as a new woman. Like, this your second life, almost. So, my question is how would Ju the Superhuman of 2019 respond to a sitaution differently from the Ju in 2016 before you were a burn survivor?”

Ju the Superhuman: “Oh, that’s a good one! In 2016, like I said I was conceited. I was arrogant. The way I responded to situations, was like,  you just know, ‘Oh this is nothing’ or ‘just can’t be me’, or I kind of shrugged off everything. Like, I didn’t value things; I didn’t take much serious, and now if a situation was to occur I would take that moment to just be grateful for life; to just be thankful that I’m not- you know, I’d rather be in this situation than to be you know… cause everyone doesn’t survive all their situations. People die every day. A lot, in the beginning was ‘Why is this happening to me?’ Not to say I was better than anyone, but that was my response to everything. And now I know to appreciate life and to be grateful in all situations.”

Pretty Hustlaz: “Right, right so,  it was almost like a wake-up call. So, now you get it.”

“Uh, I wanted to know, and the answer is probably no, because you seem to have such a great spirit about you! But, did people you know treat you differently once you became a burn survivor, like in a negative way”?

Ju the Superhuman: “And that was definitely true to that situation.”

Pretty Hustlaz: “Well, I am sorry to hear that, but like you said you didn’t need them anyways.

“I see you have your brand Survivors Only. I wanted to know at what point did you decide to take the motivation to the next level and create it? Because it’s not just your business. It’s something you use to motivate others. So, what inspired you to create it or what made you say I should do this now?”

Ju the Superhuman: “When I first got burned, um I didn’t take time away from social media. I was posting my scars and my journey throughout the whole process. And people were inboxing me every day. You know, it was burn survivors, it was people with a scar from childhood, or a birthmark; even people with eczema. They were just telling me how they were so inspired by me, because they’d been living with this for X amount of years. And they had never worn shorts or they’d never left their house without a jacket.

“And I was like, uh- that was sad to me; you know, to hear that people felt this way about themselves. So, I felt like with my brand I would be showing people that beauty is more than skin deep. And that.. you know, it doesn’t matter if we have these scars, we still deserve to feel good and dress how we want to.”

Pretty Hustlaz: “Yes ma’am, and  you do that well!

Ju the Superhuman: “Thanks you so much!”

Pretty Hustlaz: So, I also noticed (because like I said I’m an IG stalker) that not only are you a motivator and entrepreneur, but you’re also a published author, I see that you have a children’s book series that’s based on the character, Lilian. Can you give me the background on that?”

Ju the Superhuman: Yes, at the time of my accident I was actually in school to be an elementary school teacher. And I’ve always wanted to work with children and everything. And when I got burned that’s when my eyes opened to the burn community. I realized how many children get burned every day. So, I said as much as I help the adults, the children need a voice as well. And so, I created her character. I made her  a burn survivor who got burned the same way I did, with cooking oil. And I let her go through things that a child would be facing, like going back to school as a burn survivor or attending a party as a burn survivor.” 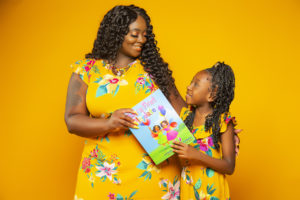 Pretty Hustlaz: Okay, I never knew… Well, obviously I never knew that you wanted to be an elementary school teacher. I’m actually a teacher, that’s what I do during the day. So, you lucked out on that one (giggling).”

Ju the Superhuman: “You have patience.”

Pretty Hustlaz: “You see what I’m doing now (giggling)…But, that is a beautiful thing. I have a two year old daughter so I may need to get those books… My next question is actually my last question. After this if you have anything else that you want to add, please feel free to do so. But, I wanted to know if you could sum up the way we should live life in three words or phrases, what would you say?”

Ju the Superhuman: “Laugh at life. I feel like if you can find humor in a bad situation, then you’ve already won half the battle.”

Pretty Hustlaz: I agree with that. I remember when I was little; I used to always laugh (I still do it too) but at stuff I probably shouldn’t laugh at. People would always say why do you laugh so much, and I’d say well, laughing is my medicine. So, I understand that.

Ju the Superhuman: “Um, I think you covered everything. You talked about my brand and what I’m doing.

“Um, I already said that one of my coping mechanisms was being honest, but I also started doing my own makeup and that made me feel like, you know, pretty. And it took the distraction away from my scars. People would be like, ‘Oh yeah, your face is beat’!’ That was definitely one of my coping mechanisms, and I’m releasing a makeup palate soon, and I’m very excited about that! That is definitely in the near future and um, that’s it.”

Pretty Hustlaz: Well, I am so thankful (if I didn’t say it the first time) that you’ve allowed Pretty Hustlaz to interview you! It was definitely a joy to have this conversation with you and get to know you and get inside your head a little bit better. I appreciate you for that!

Ju the Superhuman: “Thank you so much….” 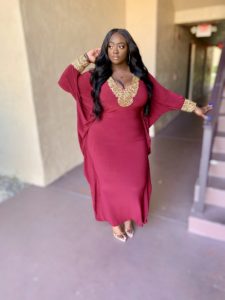