From Texas to Tennessee the peaceful and loving connection between Jill Scott and Erykah Badu was felt by over  700,000 viewers. An overwhelming amount of celebrities and supporters received the calmness and outpouring of serenity that these artists nurtured into everyone.  This moment in time felt more like a collaboration than a competition of any kind.  From talks about their current state during this pandemic, to live performances this virtual experience was one to remember.

The boogie began with “You got me” by The Roots and Erykah Badu. This infamous song connects Jill and Erykah in a couple of monumental ways. The first time Erykah heard Jill’s voice was when she listened to the demo for “You Got Me” (the first song Jill Scott ever wrote). She loved Jill’s beautiful, melodic voice so much that she stated “Woah, woah, woah what ima do?”

One day, during a show in New York City, Jill Scott was backstage with the The Roots waiting for Ms. Badu who was stuck in traffic. They ran out of time, so Quest insisted that Jill should go on stage and perform with them.  Unprepared and terrified Miss Jill Scott overcame her fears and that moment changed it all.

Timeless lyrics like, “The man that knows something knows that he knows nothing at all” and “Can’t get in the way of what I’m feeling” captivated the audience as the ladies played their second songs.  Miss Scott noted that when she wrote “Gettin’ In the Way” she felt like “Ass should be whipped,” and the lyrics to that song justify just that.

Miss Scott reminded us that there is power in our “Rolling Hills,” as she played her third song. While Miss Badu took us down memory lane with her fulfilling record “Didn’t Cha Know.”

“I need somebody to dance with, said Jill as Miss Badu played, “Other Side of the Game.” Although, I’m sure she wasn’t the only one ready to hit the dance floor. 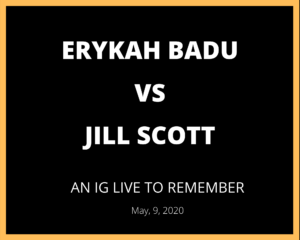 Are you feeling the vibrations they sent our way yet?

As time progressed they both gave us more light, life, and of course music that ages like wine. “Robert Glasper” by Jill Scott was played to remind women that there is a man out there who will answer every time we call.   While songs like “I’m Lonely Whenever You’re Around” made some of us reminisce on the bad relationships that we’re happy to be out of. Jill even admitted that after recording that song she hysterically cried.

Songs like “Honey Molasses”, “Today”, and “Can’t Wait” kept us filled with emotions that I’m sure had everyone smiling from ear to ear. Our ears were also blessed with classics like, “Next Lifetime by Erykah and “The Way” by Jill.

A plethora of the music that these iconic women have contributed is still relevant to today’s culture.  For instance, works such as “Cleva” by Erykah Badu inspires women to be authentic and show men our true beings. “Watching Me” by Jill Scott reflects the mind of someone who feels like they’re constantly being watched in a negative way for all of the wrong reasons. I’m sure many of us can relate to at least one of those songs.

Miss Scott and Miss Badu didn’t just put on an intimate virtual show, but they also dropped some precious gems. Jill Scott stated that “Fear is that jerk that wants to come in the middle of the night and tell you, you can’t.” While Badu recognized that though we are going through this pandemic, “It’s a lot of devastation but a lot of rebirth for many of us.”

In between songs we were lucky to obtain just enough of background information on where some of their creativity began. Erykah asked Jill the following question, “What encouraged you to write poetry and share it?” Jill explained that her eighth grade teacher gave the class an essay and she decided to write about Nikki Giovanni. From that point on she began to learn about Langston Hughes and other inspiring writers. She even had a couple of friends that encouraged her writing. Badu shared how she began writing poetry at the age of five. To be honest both of these women write lyrics it’s as if they began writing original pieces in the womb.

In the end, Jill played her song, “Crossed My Mind” as a tribute to their dear friend Andre Harell who recently passed away. Before heading out these ladies graced the audience with more love, and viewers  were transitioning over to Miss Badu’s after party.

The time that these two women granted their supporters was very appreciated. Every comment was positive and loving. We are so appreciative that you two have remained friends for all of these years and support each other; because without it we wouldn’t have witnessed the dynamic presentation from tonight.

So, who won? We all did because tonight contained an energy that no one deserved to miss.

Thank you so much Miss Badu and Miss Scott!

Special shout out to Swizz Beats and Timbaland for being the masterminds behind it all!

We’ll be looking forward to that possible Sugar Water Tour!