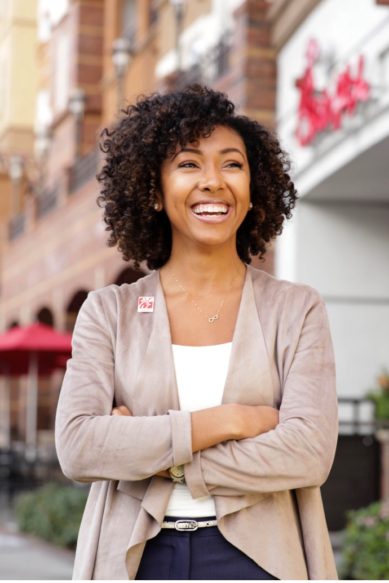 Spelman alumni, Ashley Derby is out  here sprinkling her black girl magic. Ashley is now one of the youngest owners of  a Chick-Fil-A franchise. She  opened a restaurant near the University of Southern California in Los Angles, back in 2011 after moving to LA.  Ashley became the youngest African American female franchise owner and is now looking into making more history by opening up a Downtown Los Angeles Chick-Fil-A.

Chick-Fil-A currently has over 2000 locations across the United States with its headquarters being in Atlanta, Georgia. Ashley, who is also an Atlanta native began working at Chick-Fil-A in high school with a goal of saving money to buy a car. She continued working for the franchise during her college years. While in college she focused on economics and was encouraged  by a manager to began pursuing leadership positions within the company. Upon graduating from Spelman, she attended management and development programs and within 5 years of graduating she was able to open her first Chick-Fil-A franchise.

It was announced by Chick-Fil-A on August 1, 2017 that the Los Angles location was on the way and would be owned by Ashley. It is expected to be a two-story location located on South Figueroa. The restaurant will sit about 80 people and have a section for large gatherings.

Congratulations are in order to Ashley! In 2017, Chick-Fil-A gave out over $4.9  million in scholarships to its employees helping to build and create more leader such as Ashley.