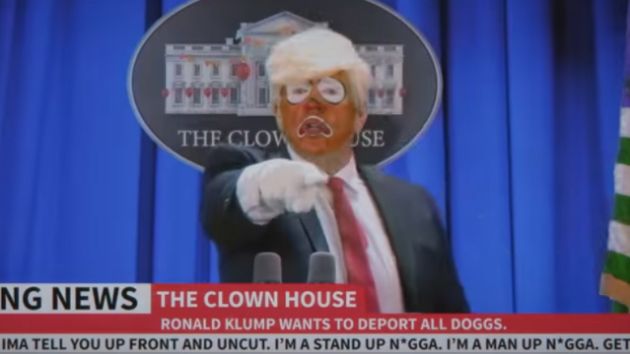 Snoop Dogg and Trump started a sparring war on twitter and since then T.I. has jumped in and even Bow Wow has been thrown into the mix.  it all started when the big D-O-Double-G released a song and visual titled “Lavender”.  In the visual there are people walking around with clown faces painted on and Snoop Dogg comes on the television.  Throughout the video you see mockery of American life and to end everything, Snoop Dogg points a gun at a person with their face paint like Trump and pulls the trigger.  Instead of the gun going off, a flag that says bang comes out of the gun as in a Looney Tunes cartoon.

The visual made a definite statement, so much to the point that you cant find it to watch on the internet.  They have pulled it.  But you know we found the exclusive way to still keep you watching right?

Tune in below for this slight dubstep remix to the song and visual so they haven’t caught it yet.  Te hee.  Just don’t tell the Republicans.