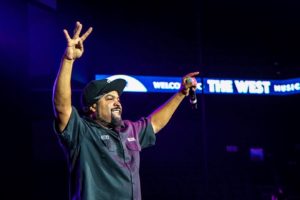 With over 8,000 fans flocking to the arena, it was a sea of lights throughout the night as the crowd used their phones to pay tribute. Festival Founder, Jason Gazzini remarked “We couldn’t be happier with the outcome in our second year! The talent delivered one incredible performance after another, and the audience energy fed the artists all night long!”

The concert was jam-packed with performances as artists delivered non-stop rapid -fire sets leading up to Ice Cube on stage performance. Roscoe opened the show with his latest hit, ‘Feeling Me’ followed by $tupid Young and J-Stone who both gave energetic performances. The audience was hyped up as G Perico performed his song ‘Number 1’ along with DJ Don Juan. Festival host, Letty Peniche, revved the crowd up and introduced Joe Moses as the crowd went wild in anticipation. The whole arena was bumping and grinding as he sang some of his hits.

Being the only female rapper on the lineup, 19-year-old, Malaynah lured the whole arena with a fresh vibe. Although new in the music industry, Malaynah’s onstage presence is undeniable – she is a star in the making as a rising female rapper. Dazzled in a silver sequin top, she sang her latest single ‘Outta My Face’ and ‘Karma.’ 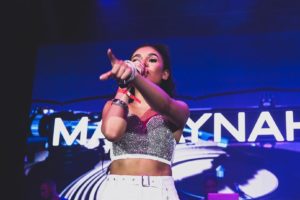 Nipsey Hussle was the festival’s inaugural headliner in May 2018, and a tribute was planned in the middle of the show. With DJ VIP spinning tracks and never before seen clips of the late rapper playing, the crowd was immersed with his music and the impact he left. A memorable moment was when Dom Kennedy sang a tribute to the late Nipsey Hussle, and with a standing ovation, the crowd sang along and raised their phones to light the night, swaying in unison as they and paid tribute to the rapper. A printed bandana with Nipsey’s face was raised from the audience, which added a special magical moment for festival-goers. 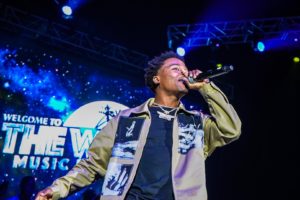 The late rapper was celebrated throughout the night, as every performer shouted out variations of “R.I.P to my brother Nipsey Hussle!” and “Let’s do it one time for Nipsey!” at some point during their set.Rapper and producer, Suga Free gave a spontaneous emotional speech about Nipsey and then went on to perform some crowd favorites. 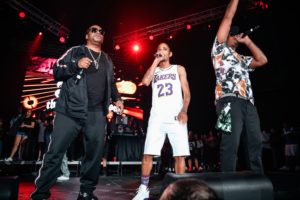 After a brief intermission, Bone Thugs-N-Harmony was introduced as “legends in the building” and as they took center stage and reflected on the moment, celebrating 25 years in the industry. Wish Bone did most of the hosting and MC duties, and the crowd went wild as they kicked off their performance with their classic ‘East 1999.’

Saving the best for last, loud echoes of “we want Ice Cube’’ could be heard from backstage as the crowd chanted for the legend. The energy of the crowed reached a climax during Ice Cube’s performance. He rapped some of his classics, like ‘That New Funkadelik’ and closed the night with ‘It Was A Good Day,’ before giving one final shout out to Nipsey.