RILEY CURRY (AND HER DAD) ARE GOING TO THE NBA FINALS 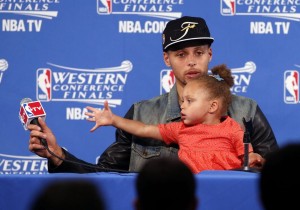 After sharing an adorable moment with his daughter following the Warriors’ Western Finals-clinching victory against the Rockets on Wednesday night, Stephen Curry again had his lovable little two-year-old steal the show in the postgame press conference.

In this press conference, Curry answered tough questions from the media. His daughter, meanwhile, took precedence with some incredibly hilarious distractions which included playing peek-a-boo behind a curtain and handing her gum to a Warriors employee.

“She’s taking advantage of the situation for sure,” Curry said at the mic.

MUST SEE! RILEY IS ABSOLUTELY ADORABLE!