Have you heard of the Fluffy Girl Gang? If not, don’t worry because soon it will be a nation wide movement. 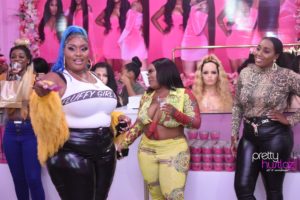 On this past Sunday, the industrious Nikki Allure had her first launch party for her global fashion brand, Fluffy Girl Gang.

Imagine a room filled with Nikki Allure’s positive vibrations and a mixture of entrepreneurs. Every being that entered the building was ready to help support this well needed movement. With a combination of music, laughter, food, networking and a performance from an upcoming rapper, Ferrari Charli the evening remained on an all time high. As time progressed exciting, interactive games where played with free giveaways and coupons. Towards the end of the event, Nikki gave a beautiful speech and thanked all of her supporters. She proclaimed to everyone that the Fluffy Girl Gang was constructed for women who grew up as the only fabulous and plus sized friend in the “group.”

This movement is a reminder that women have the right to be comfortable in their skin, no matter what anyone else thinks. Throughout her speech the humbleness of her character was displayed. Nikki Allure further explained that many women in the black community try to compete instead of creating a path that leads to success for us all. She urged everyone to mingle and network with one another. Although this event was specifically geared to the launch of her brand she still found time to build up others along the way. After wrapping up her own interview she made sure that the Glitzzy Hair INC. CEO and the owner of Laser Me Please, Davie were able to showcase their businesses as well. So, not only is Nikki Allure “in her bag”, but she wants everyone to get into their bag too.

Nikki Allure is not only an icon in the fashion world, but she’s musically talented as well. Her latest music video for the single, “Lil Bit” can be viewed on YouTube. All of her music can be streamed on all major platforms.

Don’t forget to head to the Fluffy Girl Gang website to purchase a t-shirt!

The Pretty Hustlaz team was grateful to attend such an inspiring event, and we know that many women around the world will be thanking you for helping them gain the confidence they need to be happy. 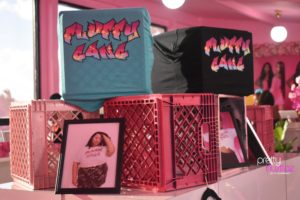