“Christie, go to the bathroom.”

“Mommy. I’m scared because there is someone who looks like a big man walking in.”

As they glance at the bathroom entry ways, Christie’s mother immediately feels the tension her daughter was uncomfortable with.

“You’re right darling, we’ll go to the Publix across the street to use it.” 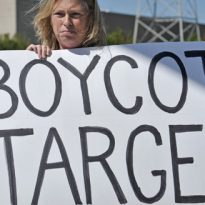 That’s the conversation a lot of parents might start having with their children if they continue to shop at Target superstores.  There has been a bill going around  to allow transgender humans to use the bathroom of their choice that they feel closely associated with.  This bill has spilled over to actual corporations adopting the practices before the bill is officially passed.  In a blog post, Target announced that they will be allowing this policy to reign free in all of their stores.  Representatives from the Minnesota based corporation are saying this will be something they are not backing down on, no matter the consequence.   Well, the consequence hasn’t quite hit their pockets just yet I presume, but shortly it will show when their profits hit that unfavorable color: the deep RED.  A petition was started by a Christian organization in efforts to abort the policy.  The American Family Association (AFA) reported after last night  there have been 744,800 signatures collected to boycott, and the number is increasing every moment.

AFA president Tim Wildmon stated that this is the organizations most successful protest and he is intrigued to see how target will handle the backlash on the economic scale.   They have already lost a sizable amount of customers just in the 48 hours that they have released this information to the public.   We can only guess how many more they will lose in the near future.  The medium they proposed to unsettled shoppers is that they have single stall family bathrooms that are located in each store for use. 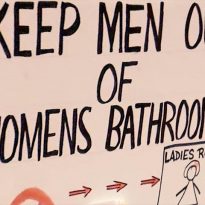 Target claimed that they strive to make an “equal and unified” workplace for their transgender team associates as well as the guests that frequent their establishment.  On the contrary most Americans, whether pronounced Christain or not, feel that this is a violation of privacy for females.  It opens opportunity to those who mask their malicious intent and gives any sexual predator access to wives and daughters in a vulnerable environment. 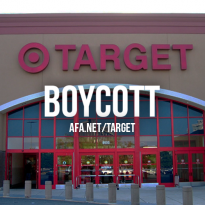 Outside of legislation, Target is the only organization to enforce these kinds of policies.  The bill is still pending in at least nine states.  Most of them are northern, including Kansas, Illinois, Indiana and more.  The only state that the bill is officiated in is North Carolina.  Their’s has an exception  though.  Even if you are transgender, you are expected to use the bathroom that is associated with the sex on your birth certificate.  Whereas with Target,  if you feel like a man or a woman, you’re able to use the bathroom associated with that feeling; No matter what the doctors told your parents you were on that fateful day.  Who knows what will happen with Target.  I know many shoppers already who have resigned any affiliation with the store.   If you have any comments on how Target is handling this please leave them below!  We would love to hear the people’s voice.  Of course visit the American Family Associations site and go sign up for the petition if you do support this movement.