Despite Divorce, LaLa and Melo Spend Mother’s Day Together. 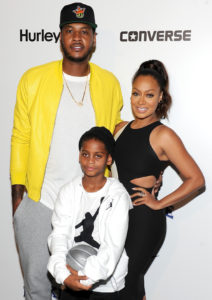 Happy long lasting relationships are hard to find in the entertainment world today, and though they seem happy and long lasting, things are not always pretty on the inside.  A little while ago, rumors started to spread that NBA star, Carmelo Anthony and his GirlBoss wife, LaLa Anthony, were going to split.

Records show via press and the social media that the couple was happy beyond measures, and were the best parents to their child, Kaiyan, could ask for.  Most were worried about the child’s well-being as it is the highest regard during divorce.  Yesterday, Carmelo and LaLa were spotted enjoying a mother’s day outing with their 10-year-old son.  They went to a restaurant in the village and then afterward had a little froyo.

Of course, the two hanging out raised questions of them really getting a divorce since no papers have been formally filed, but sources close to the two say that it’s for certain in the works.  Maybe the Anthony’s are better at keeping their personal business under wraps than the media would like.  Only time will tell.