After countless mistrials and continuations, Bill Cosby was finally handed down his 3-10 year sentence in a Pennsylvania 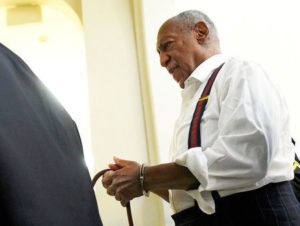 courtroom. This historic case is the first of its kind as a high profile celebrity is prosecuted under the #METOO Era. In April, Cosby was convicted of three counts of aggravated indecent assault for drugging and assaulting Andrea Constand in 2004. Keep in mind each charge carries a maximum of ten years, however, he will serve them concurrently since all three charges stem from the same incident.

Once the sentence was given, attorneys from the defense asked for bail during the appeal process. After about 20 minutes the judge came back and explained that the crime was too serious for bail to be an option. At that point the 81 year old was taken into custody to begin his sentence. Aside from the prison time, Cosby is ordered to pay a fine of $25,000 and the costs of prosecution. He is also classified as a “sexually violent predator” and will have to undergo lifetime mandatory counseling, sex offender registration, and community notification wherever he resides.

It is being reported that Cosby is no longer in county jail and has been transported to the Pennsylvania State Correctional Institution Phoenix, in Schwenksville, PA which is a state of the art maximum security prison.

For most, justice has been served. Others choose to separate the man from the legacy. This should definitely be an eye opener for those that doubted the system, justice was slow, but in the end it was victorious.

We will continue to update you as this story develops…