Lyricists that sing and rap are few and far in between nowadays.  Artist K’La signed to DefJam in 2011 and brought the real raw nature of R&B and hip hop that Erykah Badu and The Fugees introduced to music back to the forefront.

Rhyming about her experience of heartbreak and turmoil, as she reached for the stars she dreamed below is how she has won the hearts of her fans.  Her music gives expression to people’s pain.  True expression, true experiences and true moments some feel they will never come to bear with.

In every representation of herself in media she illuminates her struggle.  She discusses her homelessness when she first moved to Atlanta from Gary, Indiana to pursue her career in interviews. As well as her confessions of being a single parent of 2 in the process.  Her transparency seems endless and it transfers through the ink to the paper on each track flawlessly. 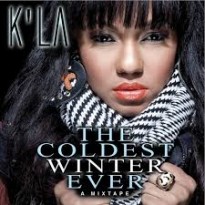 Her first mixtape was titled “The Coldest Winter Ever” and was graced with the likes of Nas and other famous producers.   “ I seen a lot of females who’ve been in a bad relationship can kind of relate…  guys talk all this mess about females have this independent woman attitude and when you meet them, they’re already damaged from the previous guy… Pretty much me expressing those feelings of how that came to be. But a lot of women tell me that they can relate.”  K’La told TheBoomBox Blog about the project in an interview.  With ease it seems K’la is able to convey all forms of pain, love, and growth through lyrics and melody.  Her most recent project  is titled “The Gospel”.  13 tracks flow together to create a storyboard of progression and determination.  She allows her flows to grace some tracks lightly, while devouring others with intentional harsh lines and breaks.  Whatever flow she chooses, she turns into a masterpiece.